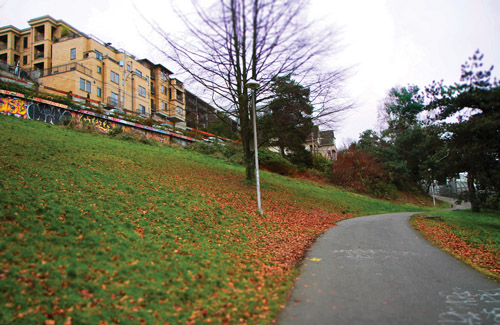 Six years of planning is finally about to pay off.

Thanks to the Choice Neighborhood grant, a number of buildings in the Yesler Terrace neighborhood—some over 70 years old—are set to
undergo reconstruction.

The nationally competitive grant, provided by Housing and Urban Development (HUD), is given to only six housing authorities across the nation to improve low-income housing.

The Seattle Housing Authority (SHA) was able to receive this grant not once, but twice. After its first grant of $10.27 million in 2011, it has now obtained a grand total of $19.73 million from HUD.

“It’s both an honor and a relief,” said SHA Senior Development Program Manager Anne Fiske Zuniga. “To get the grant is a major step forward in our ability to begin redevelopment of the neighborhood.”

SHA competed against over 30 other housing authorities in the country to receive the grant, which was distributed based on a set rubric.

Construction progress on 103 new housing units will be seen as early as next month at Yesler Way and Boren Avenue.

The Seattle University Youth Initiative has partnered with SHA to further their efforts to rebuild and offer resources to the Yesler Terrace neighborhood.

“They approached the university as we began our work with the Youth Initiative. They asked us if we could lead the educational component of their work to create a stronger network of support for children and youth who live in Yesler Terrace,” said Director for Service and Community Engagement and Seattle University Youth Initiative Kent Koth.

As the lead education partner, Seattle U will receive $100,000 a year for the next seven years to support the educational aspirations of Yesler Terrace youth. Funds will go towards data management, school programs and summer activities.

“Housing Authority essentially gives a little over $50,000 to the university and then the university is working with different organizations who will directly put on summer camps and summer academic enrichment programs,” Koth said.

SHA is thankful for the partnership.
“Seattle University has been working really closely since the beginning of our planning for Yesler transformation. The Youth Initiative and the Choice Neighborhood Grant go arm in arm with funding to help the educational outcomes for the kids,” Fiske Zuniga said.

SHA has been consulting with residents throughout the process to discern how to best meet community needs.
“Six years ago when we first started planning for Yesler, there was a lot of concern,” Fiske Zuniga said.
Now, some residents are still worried. Others are excited, and some remain skeptical.

Unlike past neighborhood grants, Neighborhood Choice Grant takes other needs into account such as health and education.

“Folks should be able to have additional services that are actually pulled together in a very thoughtful way,” said Service and Community Engagement Associate Director Rachael Steward.

Seattle U students will continue to help with the neighborhood transformation with regards to SUYI.

“It’s a tremendous learning opportunity for our students. And we have students who have been very involved in following the redevelopment at Yesler and learning about how large-scale systemic change occurs,” Koth said. “And they’re doing that through classes and also on their own time. So I think there’s a great opportunity for our school to learn and be involved.”

Additionally, this learning opportunity provides opportunities for students and Yesler Terrace residents to build community with one another.

“It’s a great opportunity for students with learning experience and the youth [from] Yesler Terrace to also have learning experiences. It’s a great way for folks to build community, which is extremely important,” Steward said. “When SU students and Seattle residents feel like Seattle or whatever neighborhood it is they live in is shared by all of them, then you tend to have people who take better care of themselves and the environment and are willing to help one another out on a day to day basis.”