The Rep Gets Dirty For ‘American Buffalo’ 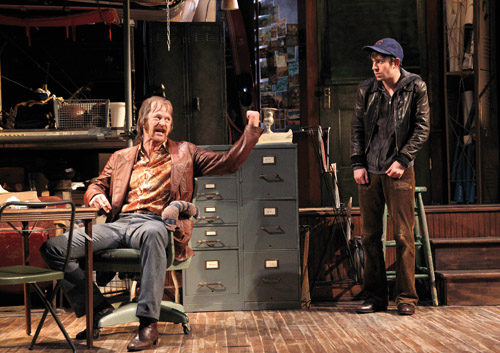 Robbery themes in films like “Reservoir Dogs” and “Ocean’s Eleven” have left audiences on the edge of their seats. In the tradition of these heist-centered stories, David Mamet’s play “American Buffalo” leaves viewers feeling the same sense of suspense.

The Seattle Repertory Theater’s production of “American Buffalo” by David Mamet is set in a 1970s Chicago junk shop that looks a lot like the hazardous homes featured on A&E’s “Hoarders.” As the curtain rose at the beginning of the play, the audience gasped at the stage’s three levels of scaffolding covered in rubbish. Any clean freak would squirm at the sight of the dirty set, which is filled to the brim with dusty standing lamps, picture frames, furniture and more. Prop chairs were even strewn across the lighting bars in the auditorium to make the audience feel cluttered.

The play’s central conflict arises after junk shop owner Donny Dubrow (played by Charles Legget) sells a buffalo nickel—hence the play’s title—to a customer. Feeling cheated after learning he sold the coin for much less than its worth, Donny plans his revenge: he will steal the man’s coin collection in pursuit of “fair business.” Once he suspects that the customer is out of town for the weekend, Donny enlists friend and drug addict Bobby, played by Zachary Simonson, to help him with the burglary.

Unfortunately Bobby can’t remember much of anything, and his simple-mindedness makes him a bumbling robber. But once Donny’s other friend Walter “Teach” Cole (played by Hans Altwies) hears about the scheme, he manipulatively tries to kick Bobby out of the equation. Soon, the lies and deceit begin to unravel.

The play showcases a wide range of vulgar swearing, or “colorful dialogue” as Seattle Repertory’s website explains. The actors even smoked real cigarettes on stage and the smoke wafted back to the theater’s 12th row. The curse words and the cigarettes transport the audience into the scene, making them feel like they are sitting next to the burglars and planning to help them steal the stash.

The dialogue goes around in circles and can be a bit confusing sometimes, but the style was purposeful: Mamet wrote the play in iambic pentameter (the same style Shakespeare used). This was done to convey the movement of the characters’ emotions. Being aware of this stylistic choice before watching the play is helpful—Mamet’s play will be better appreciated when viewers aren’t caught off guard by the language.

Even though “American Buffalo” speaks to an audience of 40 years ago, the play’s underlying message still holds true for today’s soon-to-be graduating generation. The story is meant to cast suspicion on American capitalist values and highlights tension between business and friendship in the purgatory of the lower middle class. For this reason, “American Buffalo” is a play that college students can relate to—most of them will have to face a struggle similar to these when they graduate, minus the heist of course.

No one should miss out on the opportunity to view the message and laughs this play will bring.

“American Buffalo” runs until Feb. 3 at the Seattle Repertory Theater.