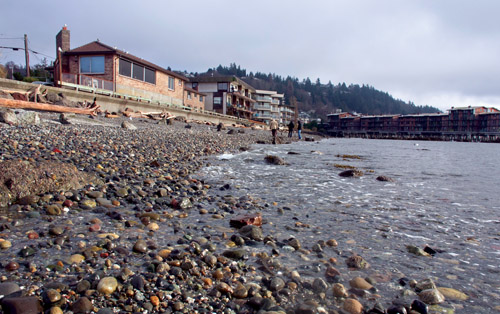 From Golden Gardens in the north all the way down to Alki, it’s undeniable that much of Seattle’s appeal lies in its gorgeous coastline.

Better enjoy it while you can.

According to the Seattle Times, parts of Interbay, Georgetown, South Park, West Seattle, Harbor Island and Golden Gardens are predicted to go underwater as the shoreline creeps up.

The Washington Climate Impacts Group and the Washington Department of Ecology reported a sea level rise of six inches in Seattle by 2050.

The Seattle Times published a map showing where land will be flooded by the rising sea. Seattle Public Utilities created the map to illustrate the impact this will have on the city, including urban flooding, problems with drinking water, and infrastructure and development issues.

Both West Seattle and Golden Gardens could experience a dramatic storm surge and profound erosion.

“If there are parking lots in that area that could exacerbate the problem because you have parking lots that are not able to seep the new water in. There is nowhere in a parking lot for the water to go so it will just spread out more,” said Dr. Jocelyn Fraga Muller of Seattle U’s Environmental Science department.

Fraga Muller teaches a class on global climate change, and adjunct faculty member Charity Lovett has developed a chemistry course on the subject as well.

Seattle Public Utilities also addressed the potential impact to the Duwamish River and South Park area. Not only is this historically a more industrialized area of the city, but the Duwamish River is also a Superfund site. Superfund is the common name for the Comprehensive Environmental Response Compensation and Liability Act, which is a federal law to clean up areas with hazardous substances.

Flooding in this area will be a problematic thanks to the remaining chemicals in the river.

“A century of heavy industrial use has left the waterway contaminated with toxic chemicals from many sources,” reported the Environmental Protection Agency.

Another factor worth considering as Seattle faces global climate change is ocean acidification.

“As we put more carbon dioxide into the atmosphere, the oceans are soaking that carbon dioxide up and that is changing the chemistry of the oceans. It is lowering the pH and making the water more acidic… that slight change in pH and acidity is changing ecosystems,” Fraga Muller said.

The Washington State Department of Ecology reported that shellfish growers in Washington and Oregon were the first to discover that ocean acidification was directly affecting their jobs and businesses around 2007, when corrosive seawater began killing off tiny young oysters by the billions in Pacific Northwest hatcheries.

The Pacific Northwest climate has changed drastically in the 20th century, including temperature and precipitation changes, decrease in snow water sites, and shifts in snowmelt and river runoff, reported the Washington Climate Change Impacts Assessment.

“While it is premature to assume that anthropogenic (i.e., human caused) climate change is exclusively driving these trends, these trends cannot be fully explained by climate variability alone.

King County reports that a Climate Action Plan will synthesize and focus on the county’s most critical goals, objectives, and strategies to reduce greenhouse gas emissions and prepare for the effects of climate change in the area.

The city of Seattle has also requested an update to the climate action plan from the Green Ribbon Commission, which advises the city on environmentally sound policies. The commission will be in charge of recommending strategies that forward the climate action agenda while still advancing the interdependent goals of job creation, affordable housing, public, health, and social equity.

With increased awareness and citywide effort, Seattle may just be able to keep the tide from coming in.