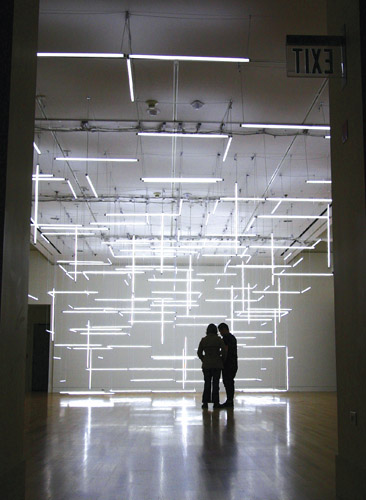 As the resident lighting designer at Seattle University, Ben Zamora is responsible for creating the atmosphere for the actors and actresses on stage. But now, the spotlight is shining
on him.

“I dreamed about what I’m doing now. But…I didn’t know that it was possible,” said Zamora.

Zamora’s work—lighting design for the Los Angeles Philharmonic at the Walt Disney Concert Hall, the Mariinsky Theatre in Russia and the Lincoln Center for the Performing Arts in New York, to name a few examples—has been seen around the world.

He always knew he wanted to be an artist, but in college Zamora’s desire to pursue art took a detour. He couldn’t get into many of the art classes he wanted to take because he wasn’t a major. So he took one of the only classes he could get: lighting design.

And to his surprise, he connected with it.

“When we started working, I realized it spoke to me in a bigger way. And I was just sort of experimenting with it for years without realizing that’s what I was doing,” Zamora said.

After graduate school, Zamora began working on 25 to 30 shows in Seattle a year.

“It was so that I could pay my rent. But what came out of that were these amazing connections with brilliant people. This city is full of amazing artists and so I had this opportunity to work with some of the best artists in the city,” Zamora said.

While working at the Washington Ensemble Theatre, Zamora realized it was time to pursue his own artistic interests.

“[Washington Ensemble Theater] decides things as a group, so you’re an equal voice in the room,” said Zamora. “There’s not one voice that says, ‘This is what we’re going to do.’ It’s you saying, ‘This is what I want to do.’ And for me that was a huge thing.”

In 2008, Zamora met Etta Lilienthal, who would be his future creative partner.

“We brought in Etta to collaborate with us and I did the lights and she did the set… There was a moment there when Etta and I were talking and I said, ‘This play is really cool, but what we are doing together is also amazing on its own,’” Zamora said.

Two years later, the duo worked together on a show called “The Thin Place” at the Intiman Theater and the experience inspired them to begin new collaborative ventures.

“We then made it a point to make our work happen,” Zamora said.

Their first major project as a team was at Seattle U. Eventually, they would become LILIENTHAL|ZAMORA.

What made them work together was their approach to art.

“I respect her work. And I feel that from her also…There’s a tension, I feel, always with what we’re making. And that to me is really exciting,” Zamora said. “It’s more exciting than doing it on my own because we push each other.”
Lilienthal feels similarly.
“[Zamora] continues to question and inquire about what it is that we’re doing and about our ideas rather than just settling on something just to have it be done. He’ll continue to ask questions and pose alternatives, even if it’s just really keeping his mind artistically alive,” said Lilienthal.

So far, both agree that their exhibition “Through Hollow Lands” at the Frye has been one of their greatest so far.

Seattle U senior and Fine Arts major Kaillee Coleman, who has worked with Zamora at the Lee Center in the past, interned for Zamora during the creation of “Through Hollow Lands.”

“What [Zamora and Lilienthal are] doing is pretty original, especially in Seattle right now. There’s not anyone doing what they’re doing,” said Coleman. “And for me, it’s something entirely different.

I’m a painter so I’ve never done anything so clean or mechanical before so I was really interested in trying it out.”

With Zamora’s guidance, Coleman learned how to solder, strip wires and make lights and connectors—technical crafts she had never practiced as a painter. The experience inspired Coleman to create her own installation piece, which she plans to put on display in February.

Zamora and Lilienthal are also moving forward with their art. Lilienthal thinks that they are on verge of getting their work overseas. Whatever the future holds, Zamora is grateful for his experiences thus far.

“It was a dream, the whole thing,” Zamora said.