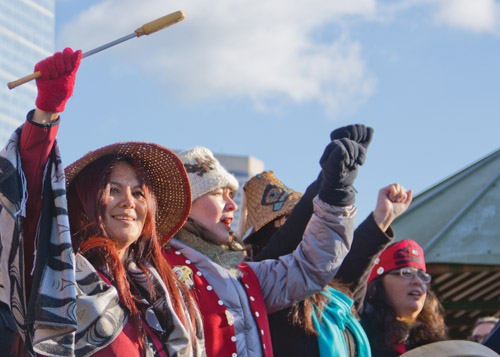 Hundreds of people gathered on Saturday to join in a prayer circle and a peaceful rally at Victor Steinbrueck Park for the indigenous rights of First Nations people.

Protestors and supporters of all different races and backgrounds came together to sing, drum and wave flags against a bill jeopardizing land reserved for indigenous people.

Idle No More is a grassroots First Nations movement demanding recognition of aboriginal rights and the rejection of Canadian Parliament’s Bill C-45, a budget bill that would change the Indian Act, the Fisheries Act and the Navigable Waters Protection Act. The movement calls upon a revolution to honor and fulfill indigenous sovereignty to protect their land and water against the damage caused by colonization.

“[It’s] urgent to act on current and upcoming legislation by the Harper Canadian Government that not only affects First Nations people but the rest of Canada’s citizens, lands and waters,” they said in a statement on the movement’s website.

What started as local teach-ins and rallies in Saskatoon, Saskatchewan soon developed into a global grassroots movement of indigenous and non-indigenous people alike demanding the sovereignty of indigenous people, the honoring of treaty rights, and the protection of land and water.

C-45, along with 14 other related bills, would make it easier for the federal government to control land management on reserves, reduce the protection of millions of tribal lakes and rivers, and use mining for fossil fuel harvesting and corporate profit.

According to the Huffington Post, activists have said that “the change to the budget bill was penned without adequate consultation with aboriginal groups and violate treaty and land rights.” Sun Media also reports that aboriginal leaders attempted to enter the House of Commons to make their voices heard but were physically denied entry.

“C-45 is not just about a budget, it is a direct attack on First Nations lands and on the bodies of water we all share from across this country,” said Sylvia McAdam, one of the four founding activists.

McAdam’s message was apparent amongst the hundreds of the protestors and supporters who showed up at Victor Steinbrueck Park on Saturday in their native attire with signs that called for justice.

But as each speaker took the microphone at the center of the peace circle, it became apparent that the rally was about more than just C-45.

“[C-45] is just one bill. That’s not why we’re here. That’s one of the reasons why we’re here,” said Ross. “We’re here about the violence against women. Women have a disproportionate opportunity [or] chance to be raped in the United States of America because of the way jurisdictional framework is. That’s just one head. This is a multi-facet[ed] attack.”

From Nicaragua, to New Zealand and Australia, to Palestine, to Hawaii, this attack continues to spread like wildfire as the discourse surrounding Bill C-45 gets more intense.

The past few week’s demonstrations and flash mobs made it clear: indigenous people will be idle no more.

Chelsee may be reached at [email protected]