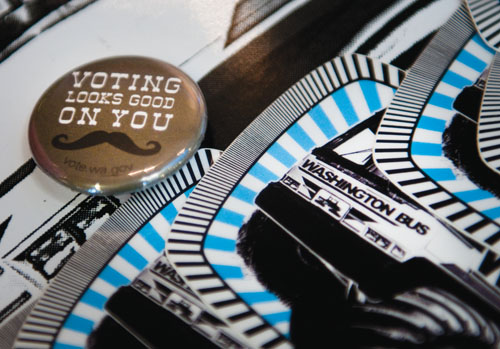 Upon hearing this news, SGSU President Nicole Gaddie relayed the information to the student body via email.
The loss of the registration documents had the potential to bar many of Seattle U’s first time voters from receiving their ballot and participating in one of the defining elections of their generation.
“Lots of students were so excited to vote and couldn’t,” Gaddie said. “We couldn’t do anything [in SGSU] and it was really unlucky.”

Her initial email did not pinpoint the exact point in the chain in which the documents were lost, though further examination revealed where she thinks the process broke down.
“I think it’s more King County’s fault than anything,” Gaddie said.

Despite the implication that King County was to blame, Washington Bus stepped up to quickly remedy the situation, as best it could. Washington Bus is a youth driven political organization created with the intentions of empowering young Americans and encouraging political advocacy. The Washington Bus chose its name as a way to symbolize that the organization aimed to be a “vehicle for hands-on democracy…and yes, we have a bus,” says the Washington Bus website.
“I was a Summer Fellow in 2011,” said Tina Norquist, former fellow at the Washington Bus. “It was probably one of the best summers I’ve had. I received invaluable training in everything from public speaking to interviewing and effective lobbying techniques. [The Washington Bus] can really open a lot of doors for you.”

In late September through early October, SGSU teamed up with Washington Bus and Seattle University’s Political Science club to host a voter registration drive in order to register as many Seattle U students as possible before the 2012 presidential election.
“It’s cool to see people who want to make a difference,” Gaddie said when asked about her experience working with the Washington Bus.
The Washington Bus provided those students whose ballots had been lost with rides to the King County Elections Division in Renton in order for those who hadn’t received their ballots to receive replacement ballots.

In addition, the Washington Bus personally called each student whose ballot may have been lost to inform them of the situation. Post Office officials were also notified.
In the email Gaddie sent to the students, she quoted Washington Bus as stating that their “first priority is to ensure that the young people we work with are able to exercise their right to vote, and we take this matter very seriously.”
Gaddie had been contacted by distraught students regarding the incident and said that she understands their frustrations and is “glad that [Seattle U] students know what’s going on.”

Despite the loss of ballots, Gaddie was very pleased with the turnout of Seattle U’s election party.
“Hundreds of students showed up,” Gaddie said. “KIRO even came and filmed. It’s a great event and I’d love to see it continue in the future.”

According to the early National Exit Poll conducted by Edison Research voters ranging from age 18 to 29 made up 19 percent of the entire voting population, one percentage point higher than that of 2008. This year, Obama secured roughly 60 percent of the youth vote, according to the Huffington Post. Romney earned approximately 36 percent.

Holly may be reached at [email protected]