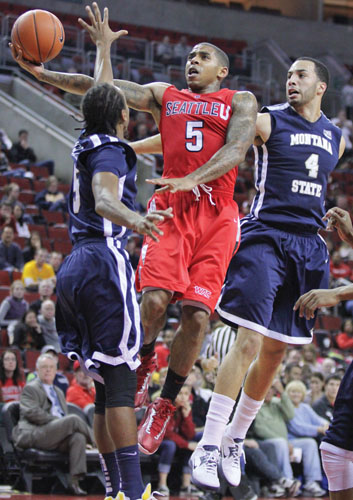 Montana State was able to cut into the lead before the Redhawks surged forward again, leading by double digits for much of the first half and entering halftime up 39-24.

The second half featured much of the same, as the Redhawks full-court press was able to force more turnovers and perimeter shots from the Bobcats, allowing the team to increase the lead to 25 midway through the second half.
“One of the ways we can be able to beat them is to get more shot opportunities,” said junior forward Clarence Trent. “So that means forcing turnovers; that’s another shot opportunity. We crash the boards, offensive rebound, that’s another shot opportunity that they didn’t get that we did.

Tempo was key to Seattle U’s success, often forcing turnovers and getting baskets in transition. They beat the Bobcats down the floor, allowing for open shots and quick possessions.

Speaking about a blocked dunk and subsequent transition, head coach Cameron Dollar said, “That kind of epitomizes the night. Great effort play by Allen [Tate] to go get it. Then we push it right back and Chad [Rasmussen] is assertive and knocks down the three. Those are the type of swings and the type of plays we want to have.”
“That’s how we want to play. Everyone kept saying we want to run, we want to run, now he’s letting us run,” Trent said. “Now we just have to do it. Pushing the ball more, hitting the open guys. So now we’re able to make them play our game instead of us playing their game.”

Seattle U was able to rotate players and give younger players experience, maintaining the lead and finishing with a comfortable 15-point win,
87-72.
“I think that’s where our depth comes in at,” Dollar said. “Guys are hungry, coming in off the bench, they’re ready to play. Allen Tate did a good job with his entire floor game, Chad Rasmussen knocked down some 3’s, Prince Obasi did a good job coming in and making plays. We got good depth, so when you rotate guys in like we do there isn’t a whole lot of drop off.”

Trent was awarded MVP of the Elgin Baylor Classic after posting 18 points and nine rebounds in just 21 minutes of action. Trent was able to cause problems for the Bobcat defense, being aggressive and getting to the line six separate times, as well as forcing turnovers and running the floor.
“Coach always tells me to be aggressive and finish at the rim. Hopefully I can make more free throws next time but that’s what coach always tells me to do, be aggressive.”

Sunderhaus added 14 points and eight rebounds of his own on 6-of-11 shooting, including an emphatic dunk in transition, marking a solid opening performance for the freshman.
Obasi also scored double figures for the Redhawks, adding 10 points, six rebounds and three assists off the bench. Rasmussen had 12 points off the bench on four three-pointers while also adding six rebounds.

Seattle U dominated the game in every metric, notching 17 steals to 13, 19 assists to the Bobcats’ six and a 51-42 rebounding margin. The aggressive defense was also able to force the Bobcats into 36 percent shooting for the game including 21 percent from behind the line. Twelve players scored for the Redhawks, including four in double figures.

The Redhawks next action will be a rematch of last year’s game against the Virginia Cavaliers in Charlottesville on Saturday, Nov. 17.