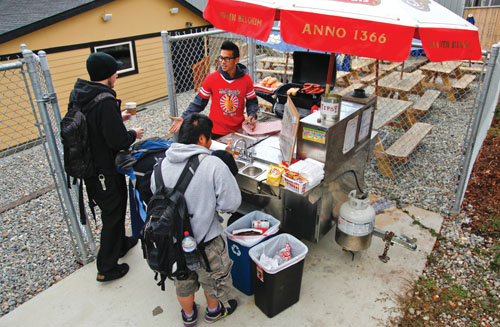 For those who often trek 12th Ave. or spend time at The Chieftain you will notice that Mad Dawg’s Hot Dogs has been missing for quite some time. The usual location in front of The Chieftain has been vacant, but hot dog lovers, fear not. Mad Dawg’s simply needs to chew through some permit paperwork before returning.

Some early rumors for the hot dog stand’s hiatus suggested the stand was closed for health violations. Queen Anne KOMO reported on the closing of the stand but the reasoning was still unclear to many fans of Mad Dawg’s.
Rest assured the food quality was not the problem. The real reason lies in the logistics of the location and the issuance of a sidewalk permit.
The Seattle Department of Transportation (SDOT) Client Assistance Memo 2501 explains the regulations for sidewalk and plaza street food vending. This memo, effective Aug. 22, 2011, details permit applications and location logistics.

Unfortunately Mad Dawg’s has some complications with their sidewalk location. Owner and Seattle University student Daniel Dovinh explains there is a problem because The Chieftain already has a sidewalk permit. The sidewalk permit is for an outdoor cafe, allowing patrons to enjoy food and beverage in the outdoor seating area, but only The Chieftain’s food and beverages.
SDOT came to Mad Dawg’s and requested another permit.
“We wondered why we need another permit when Peter [Johnson, The Chieftain owner] has already gone through all the paperwork and the cart is inside his railing. That’s the whole point of the railing,”
said Dovinh.

To avoid this issue, The Chieftain will be remodeling part of their railing to accompany Mad Dawg’s. Six feet of railing will be chopped out of The Chieftain patio, and the corner where Mad Dawg ‘s operates will be separate from the patio.
“I’ll still be in front of The Chieftain, but I’m not going to be enclosed in the railing. The city just wanted me to pay for that when [Peter] has already paid for this permit,” Dovinh said.

Dovinh explains that the reasoning behind putting the cart behind the railing was to avoid a double permit.
“I think this is just a little redundant,” he said.

Eventually Dovinh gave in and decided to get the double permit. SDOT states that this permit ordeal is an unprecedented case. It’s not very common for partnerships between businesses to exist in the same way The Chieftain and Mad Dawg’s operate.

Getting a permit through SDOT requires that Mad Dawg pay $344 for the application to be reviewed. Dovinh says the Mad Dawg’s application has already been approved and they are now awaiting a field review. It is anticipated that Mad Dawg’s can resume business in front of The Chieftain by Dec. 3. The permit for daytime operation is $344 and $688 for nighttime operation. These fees are listed on the SDOT Memo 2501 as Program Administration Fees, based on the hours of use. There is also a $1.56 fee per square foot of used sidewalk space, which is on top of the $146 for the permit fee. When all fees are calculated, the total cost for this new sidewalk permit comes to $1,578.16. These operational fees for daytime and nighttime hours must be renewed annually, so Mad Dawg is facing an additional $1,032 annual payment.
“This is why it is worth it for [SDOT] to give me a hard time.” Dovinh said. “If they can get $1,500, why not? If that’s really the rule, then I’m going to abide by it.”

Without the location in front of the bar, the number of customers has drastically dropped. It would appear that the stand has been out for almost two weeks, and the Mad Dawg’s team has had to explain that they are not leaving, they are not giving up, and there is just a technical snag. Until all the permit paperwork is sorted out, Mad Dawg’s will continue to be running their operation in the back of The Chieftain during their lunch hours.
“It’s inconvenient because people can’t see it, but students that know it’s there have been coming back,”
Dovinh said.

Dovinh explains that this long-term investment has intrinsic value.
“It’s for being next to the school, my alma mater.”

Mad Dawg’s is ready to get back on its feet for the winter season and is currently looking for Seattle U students to hire in hopes of having a student manning the stand at all times.