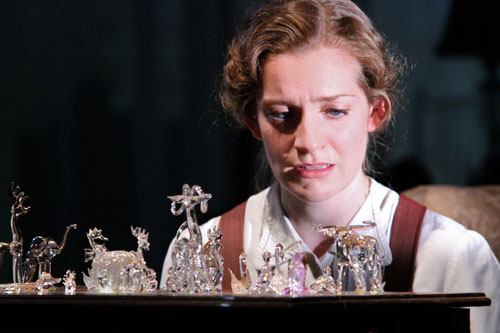 A play of memories, “The Glass Menagerie” is introduced by narrator and protagonist Tom Wingfield and recounts Wingfield’s experiences with his mother Amanda, a southern belle, and his painfully shy sister Laura who suffers from an inferiority complex that isolates her from the outside world.

Tom, who works at a shoe warehouse to support his family, is frustrated with his job and aspires to be a poet. He escapes reality through nighttime trips to the movies and local bars, which allow Tom to live vicariously through the characters he sees onscreen. He hopes to one day embark upon his own adventure, but is too burdened by his family, particularly Laura, to do so.

Smoothly transitioning from narrator to protagonist, actor Ben Huber delivers a stellar performance as Tom. He is able to convey a delicate balance between charisma and frustration related to his familial obligations, which gains the audience’s sympathy as well as their favor. Under the dim lighting, in his sharp tailored suit and with a cigarette in hand, you can see the audience members—particularly the female members—sink into their chairs, smitten and soothed by Huber’s smoky voice and magnetic charm.

Though Huber certainly does a brilliant job, it is Suzanne Bouchard who deserves the standing ovation for her performance as Amanda Wingfield. Since her Seattle Rep debut in 1988’s “Tartuffe,” Bouchard has appeared in nearly 20 productions at the theater. Celebrating Seattle Rep’s 50th anniversary season, Bouchard excels at bringing one of the most iconic roles of 20th century theatre to life in “The Glass Menagerie.”

Abandoned by her husband—who is described as a telephone man who “fell in love with long distance”—Amanda struggles to raise her two children under harsh financial conditions and yearns for a better life for both Tom and Laura. But sometimes a mother’s love can be too overbearing—so overbearing that it drives her own children to turn against her.

Though Laura’s character, played by Brenda Joyner, comes with few lines in the script, her role in the plot is what binds the family and their story together. Laura is crippled emotionally by her timidity and physically by her leg brace. She has no interest in leaving the house and spends the majority of her time with her menagerie of glass animals, which are her most prized possessions and greatest joy in life. But Amanda refuses to watch her daughter live in a fantasy world and fears she will die an old maid, so she asks Tom to find Laura a gentleman caller from his work—and he does. When Jim O’Connor, played by Eric Riedmann, is invited to eat dinner with the Wingfields, he discovers that he and Laura went to high school together. Laura, who secretly had a crush on him during those years, slowly begins to open up to his vivacity, humor and charm. She eventually shows him her glass menagerie and lets him hold her favorite glass animal, the unicorn. Jim accidentally breaks the unicorn while they dance, but Laura is not angered by this. In fact, they kiss afterwards.

But when Jim leaves in a hurry to go back to his fiancée, Laura’s dreams are crushed as well as her mother’s. Amanda is furious with Tom and accuses him of inviting a friend over knowing that he had a fiancée. In the ensuing argument, Tom walks out, leaving his family for good.

Though Tom inherits the same fate as his father, the narration at the end of the play speaks to his guilt for leaving his sister. Everywhere he goes, he is reminded, but more so haunted, by the memory of his sister whenever he sees a piece of glass. In his final speech, he bids farewell to his mother and sister, telling Laura to blow out the candles in her room, which symbolizes Tom’s release of the guilty memory.

“The Glass Menagerie,” which runs at Seattle Rep until Dec. 2, follows a family as it falls apart, crushing the members’ hopes and dreams. It is a beautiful yet tragic story about love, guilt and obligations that every family can understand, especially traditional parents who want their unconventional children to lead conventional lives. In approximately two hours, the audience will sympathize with a mother’s attempt to guide her children to happiness and success, a daughter who desperately wants to be part of a gentler world, and a son who wants to escape obligation in favor of adventure and solitude.

Chelsee may be reached at
[email protected]