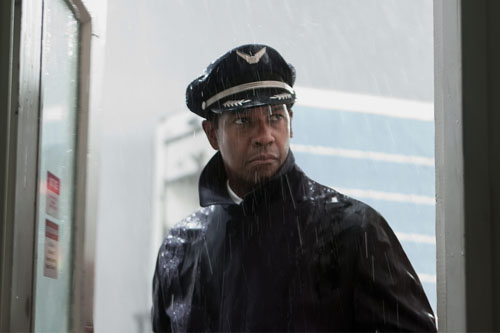 No one parties harder than pilot Whip Whitaker.

After a long night and morning of boozing, snorting cocaine and sleeping with his super hot coworker, Whitaker (Denzel Washington) somehow manages to land a malfunctioning plane in the middle of a field while he’s totally wasted. Following the crash, Whitaker’s toxicology report indicates that he was flying under the influence, which places him in the middle of an investigation seeking to determine the cause of the plane crash. After drunkenly saving the lives of 96 passengers, he finds himself facing charges of criminal negligence and manslaughter while feebly attempting to overcome his raging alcohol addiction.

“Flight” is not about heroism. The plane crash is, for all intents and purposes, unimportant. Whitaker’s heroic act is merely the introduction to a character-driven film that focuses solely on one man’s struggle with alcoholism.

Waiting for Whitaker to sober up makes “Flight” one of the most frustrating movies I’ve seen in a long time. It’s the kind of movie that makes you want to shout at the screen constantly (“I’m telling you Denzel, just order a Sprite…”), but the characters never do what you know they should. After about the tenth time Whitaker drinks, we stop sympathizing, we lose patience and we start thinking, “Come on, man. Get your sh** together already.”

The film’s ability to annoy its audience is commendable and it successfully makes the viewer feel like a betrayed friend or family member of Whitaker’s. Eventually, the exhausted audience gives up on the inebriated pilot and accepts that he is nothing more than a deadbeat drunk. Whitaker’s erratic character arch and the audience’s resentful response to it makes the film difficult to enjoy at times, but the lethargy of the movie and the protagonist’s unhealthy, cyclical actions paint an ugly and believable portrait of alcoholism.
It’s hard to dislike Denzel Washington. He led the Titans to victory in 2000 and rescued Dakota Fanning from thugs in 2004, two cinematic acts of valor that are close to many hearts. But when he’s passed out on the bathroom floor facedown in boxer-briefs, he becomes significantly less badass. “Flight’s” most impressive achievement may be the fact that, for once, the audience doesn’t love Denzel.

For a heavy film that desperately needed comic relief, “Flight’s” comedic scenes were inappropriately timed. John Goodman plays Harling Mays, the token funny character. Following the film’s most upsetting scene, Mays, Whitaker’s drug dealer, assumes the role of the doped-up fairy godmother—he pops up in a Hawaiian shirt, grinds some cocaine and saves the day. The scene is hilarious, but five minutes later “Flight” reverts back into a solemn anti-drug drama. The genre flop gave me whiplash.

Another poorly though-out character was female lead Nicole (Kelly Reilly from “Sherlock Holmes”) whose presence in the film is actually pointless. A beautiful but damaged drug addict, Nicole is supposed to become some kind of savior to Whitaker, but that never comes to fruition. Their relationship is inadequately developed and the actors have zero chemistry.
But, to be fair, it’s probably hard for two people to get to know each other when they’re perpetually blacked-out.

Kellie may be reached [email protected]